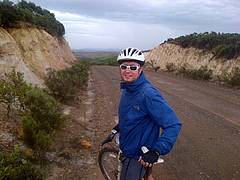 We survived! Our first day in the rain was a baptism of…water. I think it gave all of us a bit of a shock. It rained ALL DAY. As we climbed our first hill completely sodden after just an hour in the saddle I think most of us were wondering if we would manage 5 days if it was like this. Luckily we reached a sizeable summit and were told “that’s the only hill today. There are a few bumps though.” We later discovered that in professional biking parlance, hill = mountain and bump = very steep but not too long hill. The fun began on our descent. We had a 7km steep downhill along a mountain pass (65.7km/h top speed!! Don’t tell Mum). That was great fun and made it worth it.

Day two was a far more gentle experience. We began with some rolling hills where a short climb was met by a short descent and it was all balanced out. This ride took us way out in to the countryside and we were exposed to the isolation of some of the tenant farmers/workers in rural South Africa. They studied us with bemused smiles. We were able to sees bits of game here and there and were challenged to cycle through rivers; we all fell off, and sand; we all fell off.

The third day was the road to Damascus. Long, hilly and even Di and Rocky (our guides) warned us to conserve energy. At every water stop Sele (our support bus driver) was greeted as a hero. There were a few short steep hills today and then a mammoth one at the end. The sort you can see winding its way around a hill in the distance and you think “we can’t possibly be going up there.” We were.   We were lucky that mountain bikes have about 100 gears because even firmly in the granniest of granny gears we only made slow but mostly steady progress up the 5km incline. This hill led us to Honeywood Farm which has a spectacular view across the valley, amazing honey, extremely friendly hosts and 3 dogs with 11 legs.

Thursday, shortest and personally the hardest day. With legs lacking energy and wind blowing firmly in our faces all day I found this 53k to be exhausting. Having to pedal when going downhill quickly became unamusing. After what seemed like an eternity we reached a river and where pulled across it on a raft to a waiting burger.

FRIDAY!! We took a short drive the prior evening to land us at Boulders Beach and were due to cycle to Camps Bay. So with a quick swim in the ocean (freezing) with some penguins we were on our way. We were immediately treated to an impressive coastal road before cutting inland through a nature reserve. We spotted kudu and springbok running along beside us (think Jurassic park) before meeting the coast again. Enter wind stage left. As we attempted to get over Chapman’s Peak the wind literally blew some of us off our bikes. With a 100ft drop over a small wall it wasn’t the most relaxing ride but it was an amazing coastal road to witness on a bicycle. We rode 75km to Camps Bay but it felt like much less. Perhaps our fitness had improved? We bunched together and rode to Camps Bay as a peloton in to the triumphant arms of Caprice (a beautiful, down to earth and very affordable…bar).

On Saturday we visited the Red Cross Hospital and specifically the burns unit. It was a humbling experience and to see the strife and hardships being overcome by the children was saddening and uplifting in equal measure. Roux and Peter Martinez, along with the nurses and support team do an incredible job and we were very glad to contribute with the money raised and the gifts we had brought with us. Our cycle ride felt very insignificant and we all felt a bit guilty whinging about the wind and rain on various days. There were mothers at the unit whom had walked with their children for days and taken journeys across borders in order to reach the burns unit. It somehow didn’t seem fair that we had bicycles.

The strength and resilience of the injured children and their families was something I will never forget. From the pure exhilaration of cycling through amazing landscapes, to the overwhelming empathy and admiration of the Red Cross Hospital, this was a humbling and very inspiring experience not to be missed.

The latest from the Gallery

Zoe de Lantsheere explains how the challenge affected her both physically and...
Scroll to top